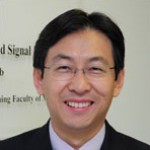 Prof. Ed X. Wu is Chair Professor of Biomedical Engineering and holds Lam Woo Professorship in Biomedical Engineering. He joined the University of Hong Kong Department of Electrical and Electronic Engineering in 2003. Before joining HKU, Prof. Wu was an Associate Professor of Radiology and Biomedical Engineering at Columbia University in New York where he led the NMR Microimaging Laboratory and served as a core member of Columbia Integrated Imaging Center. From 1990 to 1998, Prof. Wu was the lead technical member in development of the world first 3D positron emission tomography (PET) system and an ultrahigh field magnetic resonance imaging (MRI) system at Columbia University. At present, Prof. Wu is the founding Director of the interdisciplinary Laboratory of Biomedical Imaging and Signal Processing, and Research Director of 3T MRI Unit at HKU. He served as the Program Director of Medical Engineering Program from 2009 to 2013 and Associate Dean (Research) of HKU Faculty of Engineering from 2013 to 2016. His current research includes (1) MRI engineering, data acquisiton and image reconstruction; and (2) high-field and multi-modal MRI for understanding large-sacle brain structures and circuits. Prof. Wu is the recipient of numerous extramural research grants awarded by US National Institutes of Health (NIH), US Defense Advanced Research Projects Agency (DARPA), US Department of Interior and Hong Kong Research Grant Council (RGC).

Prof. Wu presently is the Asia-Pacific Editor of NMR in Biomedicine and an editorial board member of Magnetic Resonance in Medicine. He has served in numerous technical and scientific committees in professional societies, funding agencies and international conferences, including US NIH, Hong Kong RGC and ITC assessment panels. Prof. Wu is an elected Fellow of International Society for Magnetic Resonance in Medicine (ISMRM) in 2013, Institute of Electrical and Electronic Engineers (IEEE) in 2014, American Institute for Medical and Biological Engineering (AIMBE) in 2011, and Hong Kong Academy of Engineering Sciences (HKAES) in 2018. He is the recipient of 2009 Outstanding Researcher Award from HKU, 2012 Croucher Senior Research Fellowship from Croucher Foundation, and 2018 Guanghua Engineering Science and Technology Prize which is the highest national award from Chinese Academy of Engineering. Prof. Wu is the 2016-2017 President of Overseas Chinese Society for Magnetic Resonance in Medicine (OCSMRM).

He is an Honorary Professor at Departments of Medicine, Diagnostic Radiology and School of Biomedical Sciences at HKU Li Ka Shing Faculty of Medicine.